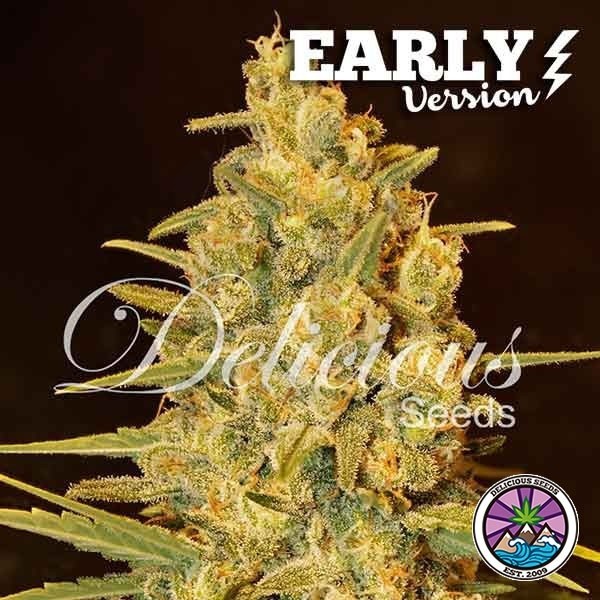 Critical Sensi Star Early Version is a strain that allows you to obtain amazing flowers in a super-short amount of time without reducing yield or quality in as far as strength and aromatic qualities.

If you already enjoy the feminized version of Critical Sensi Star but would like to have a slightly faster flowering period, this strain is perfect for you. You can harvest the same strain without having to put it through the pesky end of summer rain. This strain is known for producing large, thick buds, which don’t appreciate rain or humidity that much at all. This faster version has the exact same properties as the original, with a much shorter flowering period; it has won numerous cannabis competitions.

When grown indoors it behaves almost identically to the original version, so you don’t need to give it any sort of special treatment to provide almost the same results. This strain is known for growing compact and dense, with a large central stem that grows out thick. Its branches also get quite bushy. If you grow around 9-10 plants per square meter you can easily harvest around 400-450g per square meter in record times of just 45 flowering days.

Outdoors is where you’ll really appreciate the difference between this plant and the original, in that it finishes up much earlier which can help you to avoid rain and fungi attacking your plants; you can harvest this plant towards the start of September rather than the start of October. In as far as how compact it is, you may want to train the branches outwards to allow much light to hit the inner parts of your plants. If done right, you can grow one of these plants to around two meters.

It has quite a peculiar flavor; you can clearly taste its Critical genes, alongside citric and fruity flavors that give it more body. Its effect is almost 100% indica – physically relaxing, although not enough to really mess you up – perfect for a nice relaxing session at the end of the day.