Golosa is the perfect strain for consumers looking for unique, special effects in an easy to grow plant.

Golosa by Delicious Seeds is quite an interesting combination between a Blueberry and a Grapefruit strain, and the resulting plant was then crossed with a Bay 11 plant that won first place in the Sativa category at the High Times cup. This strain was created by Ken Estes, the owner of Gran Daddy Purple Genetics and creator of strains such as Gran Daddy Purple and Candyland. The resulting strain is an indica-dominant hybrid that’s known for its dark, almost black colors during the flowering period and its intense medicinal effect.

Indoors it develops a strong, sturdy structure that doesn’t produce many branches, so you can fit around 12-16 plants per square meter and prune the lower branches and leaves to optimize your space. You’ll be able to grow large central stems that produce an enormous amount of small buds. If you do it right, it can grow anywhere between 0.6-1m tall, producing up to 450g per square meter. It should take around 55-65 flowering days.

Outdoors it develops a much branchier, leafier structure, which allows it to easily deal with strong winds and heavy rain. If given enough space to grow, it can grow up to 2m tall easily and produce up to 800g of deliciously resinous buds from just one plant. You should be able to harvest toward the end of September.

Its flavor is quite particular and interesting; its aroma is similar to cooking spices alongside a sweet hint, but once you grind it up and smoke it you’ll notice hints of coffee, licorice, mango and pomegranate. Its effect is quite potent, capable of producing THC levels over 25%, which is why it’s a great choice if you want to increase your appetite or fight insomnia. 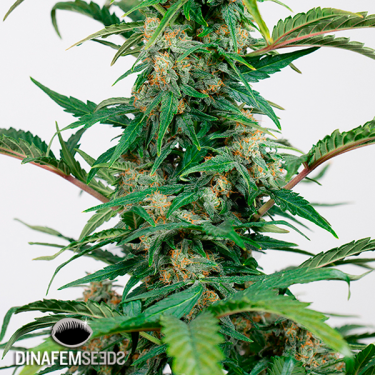 Write your review
The comment has been sent.
Equipo Growbarato G
10/30/2019