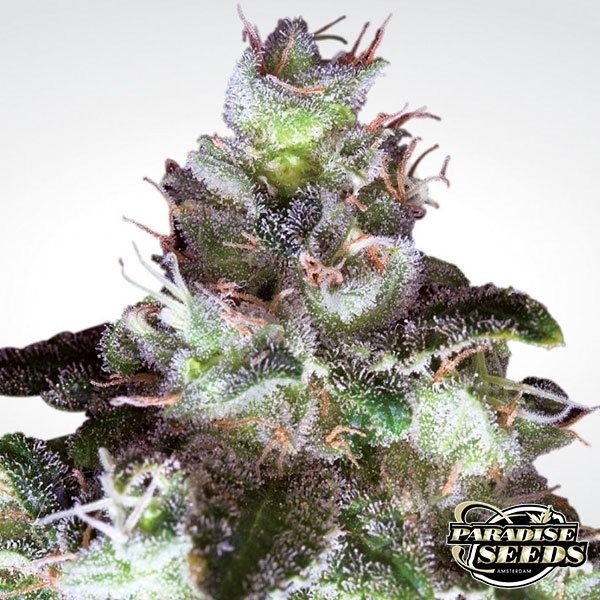 Original White Widow by Paradise Seeds was created from original clones of White Widow from '96. It's a pure strain, ideal for old-school, nostalgic times.

Original White Widow by Paradise Seeds is a strong strain which flowers effortlessly in any growing medium. It sprouts early, developing very beautiful, long and large flowers. They are very similar to each other and almost look as if they were made out of plastic. This is the new version of the legendary cannabis strain, developed by the prestigious Dutch seed bank.

When plants start to flower indoors, you'll be able to see their premature resin. Resin will be already present in the buds and by the end of the flowering stage it will look like the buds are covered with snow. Long colas of buds will fill your growing space so it's a good idea to employ a SCRoG system and collect your harvest after 60 flowering days. The amount of resin produced by this strain is amazing, even for experienced growers, and it's perfect to make your own hash. Big One fertilizer will increase the yield.

Outdoors, we'll have a rounded and vigorous plant, capable of easily putting up with the weight of its buds. You'll be able to harvest around the beginning of October. It's also quite a legendary strain outdoors, since it reacts well to low temperatures which cause it to develop fleshy buds. It's the perfect weed for commercial and therapeutic purposes. When compared with other versions of White Widow, specimens of Original White Widow are taller and can grow over 2m tall if provided with enough root space.

A strong flavor of pine-trees and flowers will flood your mouth as its relaxing effect starts to take hold of you from the first drag. Absolutely recommended for any kind of grower. Its effects remind us of the White Widow of the 90's, which provided a powerful body high. A very recommended choice for followers of classic strains: