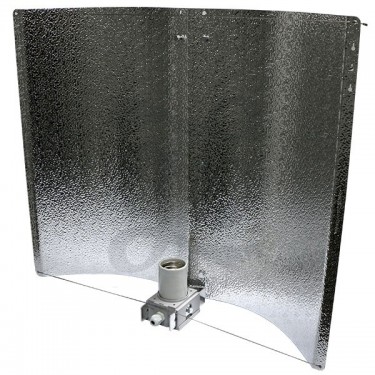 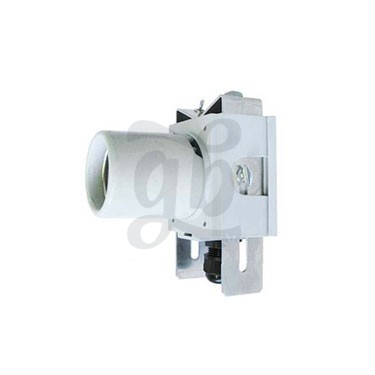 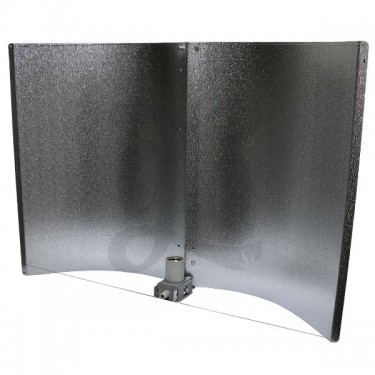 In the world of reflectors you can find everything, from the classic reflectors with a parabolic shape to rhomboid shape reflectors, round reflectors, refrigerated reflectors to models that concentrate the flow of light in a point or spread it all over the crop.

All models of Adjust a Wings belong to that last class. It can spread light homogeneously all over the crop achieving even results, preventing an excessive development of the central parts or just under the lamp which usually translates into an excessive difference of phenotypes, very different from what would happen naturally outdoors.

Adjust a Wings is a reflector made of flexible aluminium that enables to increase the cultivation surface with the same reflector and without adding additional lamps. Therefore, it helps to save energy and reduces heat in our grow rooms. The manufacturer states it is possible to grow 1.25 m2 with a bulb of 400W -most likely true- and harvest up to 1Kg of weed - although it is technically possible and they might refer to wet weight, we find this is overtly optimistic.

With a 600W bulb it is possible to cover up to 2.35m2, according to manufacturer, and with the help of a spreader it is possible to get the lamp closer in order to increase production in a 33%. A spreader is an aluminium device to dissipate heat more quickly and it is to be set under the bulb. The spreader has holes so it allows the pass of light while pushing heat away and gets a result similar to a Cooltube. Since the heat is evacuated, flowers of better quality develop, with more resin, a more intense flavor and more penetrating scent.

There are cheaper several versions of this reflector and according to some growers, less profitable due to the material, the degree of polishing and the resistance to light reflection. This obviously has an incidence on prices. Indeed, what is cheap tends to be expensive in the long run when you are looking for a quality result.

There are imitations of the Adjust a Wings reflector. However, they are easily recognizable and they don't have the exact same size and don't cover the same surface. Also, the material and finishings are not the same.

The most similar reflector to the Adjust a Wings might be the rhomboid one. This reflector is usually used to bring light to the most hidden corners of your grow op. Its shape, similar to wings, spread light very well allowing a proper development of the plants and preventing the ones right under the lamp to shoot up too quickly and becoming too tall for indoor gardens. Indeed, long plants are rarely more than an "empty stick" from which we won't harvest much.

Another version of the Adjust a Wings lets you put two bulbs in the same reflector, increasing the light intensity received by the plants. This results in better harvest, that is, denser buds, since each bulb reaches different parts of the garden. Besides, it lets you use from 800W to 1200W per m2. The boldest ones may try to use up to 2000W being there is an intrinsic risk due to the excessive heat generated by so much power.

The Adjust a Wings is a light-weighed reflector which can be used inside a grow tent without damaging its structure. It also allows us to use simple easy rollers rather than chains and carabiners, as it is the case with heavier reflectors.

Its ceramic base, fragile to clashes but extremely resistant to the high operating temperatures, can be used with sodium, mh and low consumption bulbs of several voltages. Its shape is fixed by heat resistant wires that don't deform the reflector and ensure a homogeneous work. Working with Adjust a Wings will let you get plants of the same height, regardless of their location in your growing space.