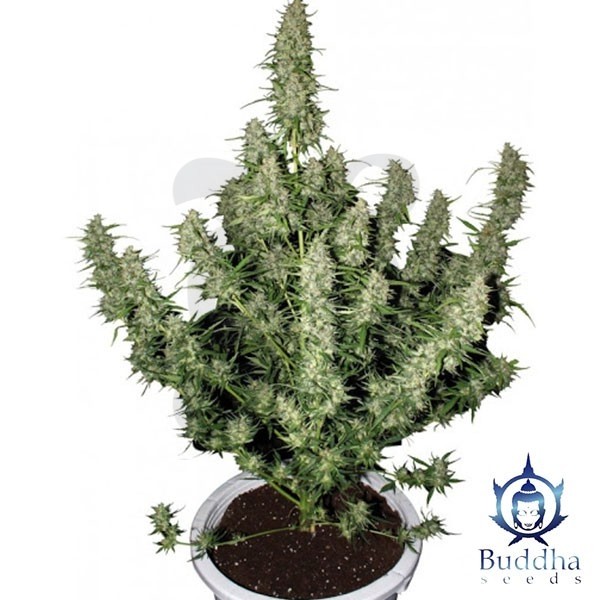 This autoflowering strain is quite large, and takes just 80 days to fully complete its cycle.

By buying this product you can collect up to 20 loyalty points. Your cart will total 20 loyaltypointsrsi that can be converted into a voucher of € 4.00.

Magnum by Buddha Seeds is a feminized autoflowering strain with sativa-like characteristics such as long spaces between nodes and thin, light green leaves. The seed bank refuses to reveal what strains were used to create this beauty, but it’s an easy assumption that Jack Herer or Haze were involved due to its incensed flavor.

Indoors, you’ll need to program your light timer to 20h light and 4h dark. This will allow your plants to develop as much as they possibly can, expressing their full potential in as far as growth. Place just 4 plants per 600w light in order to fill out a square meter, as the side branches grow quite large too. You can get up to 500g per square meter under the right conditions.

Outdoors, these plants grow for about 20 days and flower in just 2 months, growing up to a meter and a half tall and producing up to 200g per plant, which is quite impressive as it’s autoflowering. It also has quite large buds, but not too compact – the true quality of this plant lies in the resin it produces. It’s quite resistant to pests and fungi, because it grows so fast that insects and other issues hardly have any time to appear.

It has an incensed, sweet flavor that’s quite similar to Haze. It has a thick, dense smoke that hangs around in the air for quite a while. It has a powerful Jack Herer effect, with an instant energetic high.

I buy these same seeds every year regardless of whatever else I might be growing. This is a miracle strain for low-maintenance, high-yield, rapid-growth, virtually idiot-proof outdoor growing. Whatever it says on the packet, eight weeks and the plants are ready to come down. TWO MONTHS! I plant some in March/April and another batch in June. Water them every day and feed them every other day... maybe forget the odd day here or there... doesn’t matter, they grow on regardless. I grow this strain to ensure I always have something to smoke should anything go wrong with my more experimental growing endeavours. You can’t go wrong with these seeds.

Third time buying these seeds. Can’t go wrong. The speed at which they grow is out of this world. Might buy one more batch this year for outdoors.

Don’t look any further. This is the one-stop shop for all your weed needs.