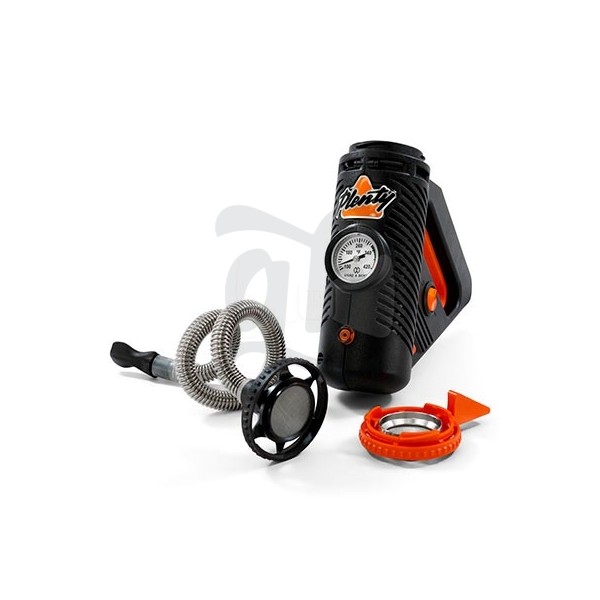 Plenty is one of the best cannabis vaporizers on the market when it comes to cannabinoid vaporization.

By buying this product you can collect up to 23 loyalty points. Your cart will total 23 loyaltypointsrsi that can be converted into a voucher of € 4.60.

The Plenty vaporizer uses practically the exact same system as the Volcano, although instead of filling a balloon you’ll be able to inhale directly from the vaporizer.

Many vaporizers tend to waste cannabis when in use, producing less vapor than what you’d expect. The Plenty allows you to absorb lots of dense vapor which is much more satiating.

The vapor is so dense that it’s almost as satiating as actual smoking, which makes it perfect for those that are more used to smoking joints; when you smoke a joint you’re only absorbing 20% THC, whereas when you vaporize it you can absorb up to 90%.

It’s super easy to use; simply turn it on and it’s ready to begin heating up to your chosen temperature. When you pull the trigger it’ll heat up faster and once the light goes off it’s ready to use – you can now take a drag of delicious, cooled vapor.

If you’ve had your fill before you finish the round you’ve loaded, you can simply set it aside and finish it later.

With just half a gram you should have enough for a good few drags, unlike many other portable cannabis vaporizers. It doesn’t weigh much and is indeed portable, but you’ll need access to a power outlet as it needs to be plugged in.

Compared to the Volcano model, this version is highly portable – at least you don’t need to carry it around in a big backpack.