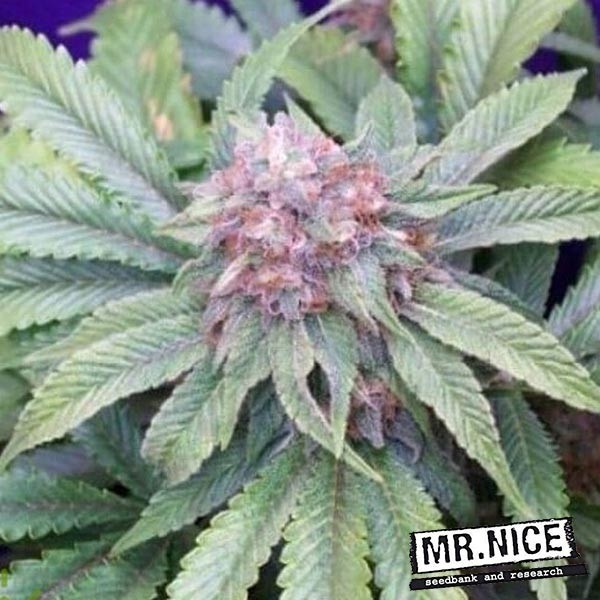 G13 Widow Regular by Mr. Nice Seeds is the perfect combination between a Black Widow, which made a name for itself as soon as it began to be sold in Dutch coffee shops, and a mysterious G13 of which nobody really knows its origins. The effect that it produces is incredibly physical and highly medicinal when it comes to alleviating intense muscle pain. It’s not that hard to grow at all, so everyone can make the most of this strains intense flavor and amazing properties.

Indoors, due to its indica dominance, it doesn’t stretch out too tall, producing plenty of branches that grow upwards, almost as tall as the central stem. It’s quite stress resistant and deals well with typical cannabis insect infestations. When grown organically in 11L flowerpots it can grow between 0.6-1.4m tall. Due to its many branches, we recommend growing around 6-9 plants per square meter. This allows you to harvest up to 400g per square meter after 50-70 flowering days.

Outdoors it grows quite bushy and thick which makes it quite sturdy, allowing it to put up with strong winds without breaking or snapping. When grown straight in the ground it can grow up to two meters tall, producing many branches thanks to its average node-distance. It doesn’t give incredibly massive yields, but you can still harvest up to 500g per plant, producing amazing quality flowers. You should be able to harvest towards the end of September.

Its flavor is highly appreciated among old school growers, taking them back to the good old days. This is due to its aromatic, musky, earthy and intense flavors that were quite common back in the 90s. Its effect is incredibly physically potent, although it also produces a mental stimulation that allows for quite an intense high. It’s great for treating issues such as muscle pain.