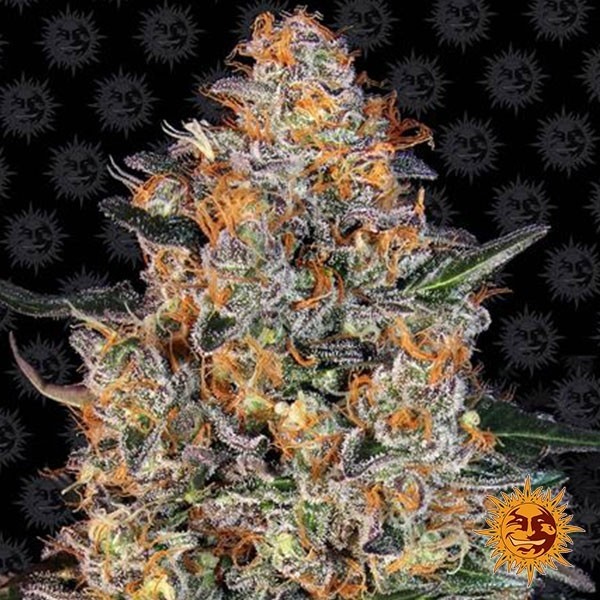 Bubba Kush from Barney’s Farm seeds bank, has extremely high THC levels that can reach up to 29%. It’s got a classic fuel taste mixed with some earthy touches.

Bubba Kush is an excellent feminized seed from Barney’s Farm seeds bank that stands out for its amazing THC levels, which can reach up to 29%. This strain comes from the cross between Afghan Kush Landrace and OG Kush. It has an indica 70/sativa 30% ratio; therefore, it offers sedative and active effects at the same time.

Thanks to its parental predecessors, it has the capability to produce large yields full of buds covered in a white and shiny layer of trichomes that will delight its growers. It emanates a sweet and slightly spiced aroma that classic smokers will love.

This strain is considered to have the most relaxing effects in the cannabis world. Its origin goes back to the 90’s, when famous grower Bubba decided to start studying this strain in Florida University. After years devoted to Kush and Bubba strains, he managed to create one of the most grown strains over the following decades.

Bubba Kush from Barney’s Farm obtains a very large yield of up to 500gr/m2 with 8 plants in 11L flowerpots. After a flowering period of 8-9 weeks, they can reach 1m in height, which makes them a great option for growers with limited space. For this strain to develop correctly, it is advisable for the substrate to contain certain substances such as white peat, black moss, worm humus, coco, etc.

This photo dependent strain assures a promising yield of up to 1kg/per plant once cured and dried when grown outdoors. It’s ready to harvest during the first two weeks of October. This strain is more suited for mild and warm climates like the Mediterranean area as it needs a minimum of 6h a day of direct sunlight.

One way to improve its yield and its amazing scents and flavors is to use flower stimulants like Sumo Active Boost which is formulated with triacontanol and seaweed extracts. Another great option to use is the Flowering Pack from Genehtik Nutrients which contains NPK fertilizers rich in amino acids, a stimulator, a 40-20 PK and a flowering finisher.

The organoleptic properties of this historic strain can be felt in its deep fuel scents mixed with some spiced and spicy touches. Its flavor slightly  sweet and earthy, similar to coffee (mocha) and cocoa. All of this makes it an ideal strain for growers and smokers that are more into classic cannabis.

Bubba Kush has very high THC levels (nearly 29%) and it has indica dominance (70%), therefore, its effect is powerfully relaxing and a good help against physical pain and sleeping disorders. It has a low sativa content but it can be felt in an initial feeling or euphoria and mental clarity despite the sense of calmness and inner peace.