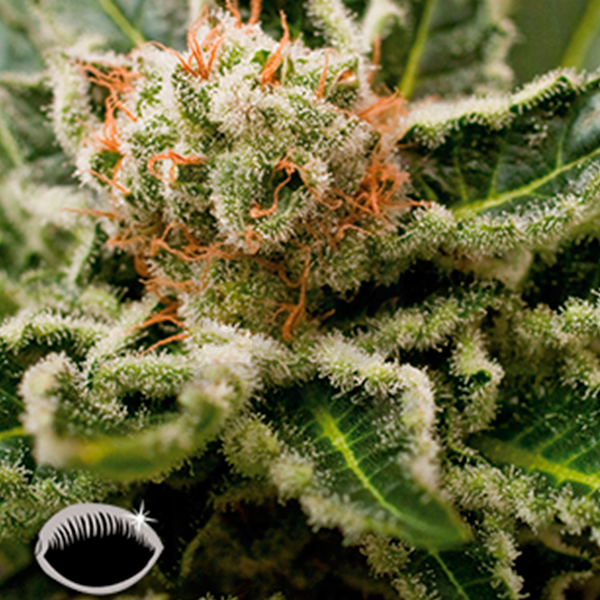 Shark Attack by Dinafem combines the best indicas to give growers lots of resin, thick buds and amazing relaxing effects all in the same strain.

Shark Attack by Dinafem will have you couch-locked after just a few drags thanks to its powerful blend of indica strains. The buds have a beautiful Super Skunk strength, whereas the resin is directly influenced by its White Widow genes.

It takes an astounding 55 days to flower indoors, growing a large amount of orange pistils with small leaves that are absolutely covered in resin. Shark Attack has quite a dense, fast growth period, so you’ll have amazingly formed buds in less than three months. The calyxes have an electric color and are extremely shiny due to the amount of resin they contain. You can get up to 800g with just 10 plants per square meter; productive and easy to grow.

Outdoors it’ll show its Skunk side, with thick stems that are capable of holding up the enormous flowers it will grow. Thanks to its Skunk genes it’ll have very few leaves which’ll make it easier to grow as well as trim and dry. You’ll love this plant if you treat it right; you can get 1kg per plant.

It’s perfect if you’re into resin extracts, as even the leaves and stems have high levels of CBD, making it perfect for medicinal extracts thanks to the fact that CBD counteracts THC’s psychoactive effect. It has a powerful, mentally and physically heavy effect.

ya la he probado y no veas como pega